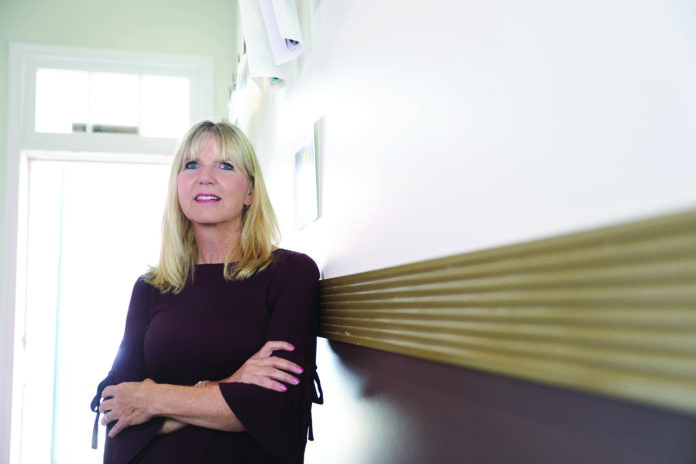 Theresa Rasmussen is a person who recognizes and embraces beauty in both the ordinary and the extraordinary. Whether it’s a pretty sunrise on her commute to work or a breathtaking panorama of the Alps, Theresa enjoys the pursuit and capture of nature photography. When she isn’t working as a cartographer for the Army Corps of Engineers in Alexandria, she’s often on a hiking trail with her camera gear.

When Theresa found a small, pea-sized lump below her collarbone, she immediately had it checked out by her doctor. “My doctor didn’t think it was anything,” she says. “But she did a biopsy and it was breast cancer.”

The diagnosis was Stage 1, which Theresa refers to as “lucky.” Her cancer was a rare form called tubular, which means that although it was invasive, it was less aggressive. “They call it well-differentiated,” she says. “Which means that it’s less likely to grow quickly or spread. If you’re going to have it, it’s one of the best kinds to have.”

The treatment that followed was efficient. She found the lump in March 2006. By May 6, she had a double/bilateral mastectomy. Over the course of four months, she had four surgeries.

“I was kind of done with surgery after that,” she said.

Her doctor actually invited her in to look at a picture of her cancer, mainly to assuage her fears. As it turned out, she had the cancer of a sixty year old, which is good, because a sixty year old’s cells don’t divide as fast.

Theresa credits the wide community of cancer survivors with getting her through those difficult months. She often visited the discussion boards on the Susan G. Komen site, where she received information and support. Since her recovery, she now relishes her role as someone who can provide the same help to others undergoing the cancer treatment process. She also encourages patients to trust their instincts when it comes to their treatment and care.

Though the follow-up plan only included radiation after her surgery, she read a comment on the Susan G. Komen site that also recommended getting an MRI. “At that point they didn’t recommend [an MRI] as a follow up,” she says. “I decided to have my MRI, and sure enough it found two more lumps.” The exam on the tissue after the lumpectomy uncovered LCIS (Lobular carcinoma in situ), an abnormal cell growth that increases the risk of developing breast cancer.

Theresa has been cancer-free for over ten years, and has cherished the ability to immerse herself in her hobbies of photography and hiking. She and her daughter recently hiked the Italian Alps, during which they both captured many landscape photos.

There is a picture that she considers more important than any of her other photos: her routine DEXA scan. One of the drugs she was on for her breast cancer puts her at a higher risk for low bone density. She goes to Medical Imaging of Fredericksburg for regular DEXA scans. “They measure your hip and spine and [use the DEXA scan] to see the bone density loss,” she says. “The drug that she prescribed caused me to go into Osteopenia,” which the scan was able to catch.

Theresa cannot overemphasize the importance of following your instincts when it comes to cancer treatment, as well as finding some kind of support group.

“The online message board was [mine],” she says. “[I] couldn’t have made it through without that.”

Debbie Treloar is no stranger to challenging circumstances. After earning her LPN certificate in 1969, she and her husband moved to California where they both worked for the correctional system. “I was an MTA (Medical Technician),” she says. “and I did maximum security, so…it was real interesting.” She spent seven years at the prison, working with high risk inmates. “We were responsible for doing sit-calls and prescribing and suturing people up.” Her X-ray tech was actually a prisoner. “He was a good X-ray tech.”

She clearly recalls one incident in which she got into an argument with one of the inmates. As the argument escalated, she felt her radio taken off her belt. It was her X-ray tech.

Apparently the other prisoner was getting ready to shank Debbie, and her X-ray tech knew about it. “I guess there was a word out in the yard,” she said.
After a work-related injury put her on disability, Debbie and her husband moved to Virginia to help take care of her grandchildren. She suffers from arthritis, especially in her back, so in 2011 she visited an imaging center in Northern Virginia to get an MRI of her spine. The images showed her arthritis, and her doctor told her she was going to have to manage it.

“I’ve been going to [a] pain clinic since 2011,” she says. “They do injections in my spine just to manage the pain. I’ve gone through a whole regime now—we’re cutting the medications down slowly. It works.”

When she and her husband moved to Fredericksburg in 2013, she started having balance issues, so her neurologist, Dr. Irwin, recommended that she get MRIs from her head all the way down through her spine. It was a longer process this time, requiring three different visits at forty-five minutes each, with images of her brain, cervical spine, and lower spine. At that time, Medical Imaging of Fredericksburg noticed the presence of a large tumor in her kidney.

“It was seen on the MRI from [NOVA], and they never noted it,” she says. “It was four years in between, and I had that cancer the whole time.”

After a radical nephrectomy at Mary Washington Hospital, the tumor came back as a clear-cell carcinoma, which meant she didn’t have to go through any chemotherapy. She goes back for blood work and chest X-rays every six months, but her doctor has declared her cancer-free.

“I never would have known,” Debbie says. “If it’d gone further, I probably wouldn’t be here talking to you right now. [But] Medical Imaging of Fredericksburg caught it.”

“I NEVER WOULD HAVE KNOWN,” DEBBIE SAYS. “IF IT’D GONE FURTHER, I PROBABLY WOULDN’T BE HERE TALKING TO YOU RIGHT NOW. [BUT] MEDICAL IMAGING OF FREDERICKSBURG CAUGHT IT.”

For Debbie, being cancer-free means more time with her grandchildren, two of which are avid history buffs. While she no longer cares for them full-time, there are frequent drives between Fredericksburg and Fairfax for visits. She enjoys taking them to local landmarks, such as Mary Ball Washington’s house, where her youngest granddaughter stumps the tour guides.

“They love it down here,” Debbie says. And she is thankful for her time with them.