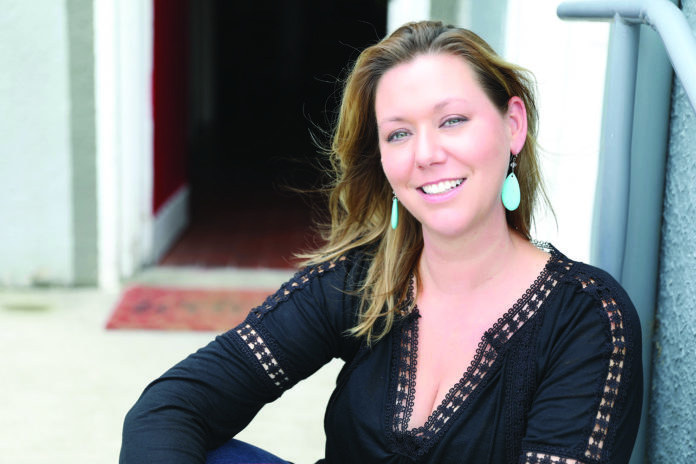 Joni Kanzawa’s doorbell rings many times a week. During our brief interview, a TV was left on her doorstep. “Sorry for the interruption,” Joni apologizes over the barking of her dog. “A local family just lost everything in a house fire and we’re collecting donations to help them out.”

It’s been five years since Joni’s battle with breast cancer began, when she found herself the recipient of an outpouring of love and support. A never-ending stream of donations continues to flood in as Joni receives requests and distributes items to families in need. “In the midst of experiencing the darkest moments of my life, it was a network of support that helped me through it,” Joni recalls. She chose to embrace positivity then and she chooses to spread it now.

As a manager at a high volume Victoria’s Secret store in Atlanta, Georgia long before her diagnosis, Joni Kanzawa created a “Team Pink” group to motivate employees to get involved in breast cancer awareness. She and her employees would encourage participation in the local Susan G. Komen Race for the Cure and raise money for cancer research. “Team Pink” even joined forces with a local Pink Heals group to broaden their impact during events held for those battling all forms of cancer.

Then Team Pink’s efforts took a very personal turn. “Victoria’s Secret has a fun, upbeat line called PINK. When we had a vacancy in the PINK section, we couldn’t fill that position with just anyone. We needed to hire an individual who properly fit that role,” Joni shared. Enter Danica, a bubbly, engaging young woman who was about to lose her mother to breast cancer. “We rallied around Danica and broadened our team to include many people outside our retail community.”

As the group grew, so did their efforts. When Joni lost her 30-year-old neighbor Gigi, to colon cancer, Team Pink rallied around Gigi’s husband and their four children. Years later, it was that network of support that would unite around Joni when she was diagnosed. “People are put in our path for a reason. I firmly believe that. Whether they break our hearts so we can learn or they lean on us so we can help, they belong on our journey.”

Soon after leaving Atlanta and moving to Fredericksburg, at only 34 years old, Joni was diagnosed with breast cancer. “Because of my ongoing involvement, I thought I understood what it was like for people. Until you’re immersed, until you know what it’s like to hear the words…until it’s your husband and your daughter who might need to live without their wife and mother, you just don’t get it.”

As a new resident of the Fredericksburg community—without many friends or family members nearby—Joni found herself surrounded with support. “People came out of the woodwork, people we had just met: neighbors, parents and teachers from school, colleagues from work.” Joni firmly believes that God allowed her and her family to be surrounded specifically by the Fredericksburg community to feel the power in being supported by strangers.

One such stranger would change the course of Joni’s life forever.
At the time of her diagnosis, Joni’s daughter, Windsor, was in kindergarten at Grafton Village Elementary. Windsor’s (now retired) teacher, Tina Renninger, sewed Windsor a little Georgia Bulldogs dress and a matching one for her dolly. Renninger’s daughter, Carly, knit hats for Joni to wear, something necessary for a Georgia native who had lost all her hair in the middle of her first chilly Virginia winter.

Soon after Joni’s cancer went into remission, right around Christmas time, she found out that Tina’s granddaughter was diagnosed with brain cancer. Joni immediately launched into action, rallying together a “crazy crew” of supporters who called themselves Ellie’s Elves. “Basically, we were trying to take care of Christmas presents,” Joni recalls, “and so many people wanted to help.”

When Ellie passed away that Christmas, Joni continued to immerse herself in the work of fundraising to help families who are dealing with cancer. In October of 2017, four years after the group began collecting Christmas gifts, Ellie’s Elves was officially awarded nonprofit status. With the mission of “rallying support for families in crisis”, Joni is passionate about helping those in their darkest moments. And it’s pretty clear that Ellie’s Elves has a whole lot more light to shine.

Joni is also passionate about spreading awareness—specifically when it comes to early detection. “‘Hope’ is a word we often hear in the cancer world. Actually, I think the word is used a little too often. To have hope is a powerful and beautiful thing, but when you’re in your darkest moment, facing insurmountable odds, it feels nearly impossible to drum it up.”
“My favorite word is ‘perspective’. I found that in the midst of dealing with something I had not chosen, choosing my attitude is how I decided to go about finding hope.” And while Joni walks the path to hope, she will tirelessly work to bring others alongside her.

At Joni’s most recent annual exam at Imaging Center for Women, she decided to have a 3D mammogram, “and I’m so glad I did.” In its precision, the 3D mammogram detected pre-cancerous cells. “It’s pretty amazing to have that technology available to us right here in Fredericksburg.” Joni is thankful for the early detection which led to surgical biopsy rather than radiation and chemotherapy.