What do the D.C. intelligence community, an unlicensed driver, and air plants have in common? They’ve all led to the unbridled success of our region’s most tenacious entrepreneur.

“I moved to D.C. from Virginia Beach,” says Elizabeth Ryan, owner and CEO of Hinterland Trading Company. “I worked as a government contractor in the intelligence community.” And, that’s literally all that she could tell us.

Elizabeth and her husband Kelle had just moved their family into a three-story house. With young kids and an active lifestyle, things seemed good in the Ryan household.

But, on the morning of May 6, 2005, Elizabeth experienced a life-altering accident. After walking her kids to the school bus stop, she stayed to talk with a few of the neighborhood moms. And that’s when it happened.

A notoriously bad driver in the neighborhood jumped a median and struck Elizabeth with her car.As the driver powered her way to the next sidewalk, Elizabeth flew off the hood of the car and the driver hit a no-parking sign. Miraculously, the sign protected Elizabeth’s head from being crushed by the car, and she survived.

After being immobile for the first three months of recovery, Elizabeth spent the following six years in and out of surgery, which meant being in and out of the office. “In contracting, you don’t get paid if you don’t go to work. And, I couldn’t keep up with my team, so I finally left my job,” explains Elizabeth.

Support on All Sides

It took the doctors time to ease her constant pain, and with each new surgery came a period of immobility and healing.

Elizabeth explains, “If it wasn’t for my friends in the neighborhood, my mom, and my husband Kelle, I don’t know how I would’ve made it.”

A myriad of surgeries meant the need for a lot of medical imaging.

“I was in and out of both the North Stafford and Fredericksburg Medical Imaging locations. Their level of care is amazing,” says Elizabeth. “When you go in, you’re so stressed and they were very supportive. The other places I’ve been were just putting me through the mill.”

As someone who has founded her company on great customer service, Elizabeth can spot bad service from a mile away. “Just the fact that they care,” states Elizabeth. “I’m not just saying this for an article—I’d tell the truth.”

From Pain to Prosperity

After leaving her government-contracting job, it was time to find new sources of income. First, Elizabeth started a purse business, but she couldn’t keep up with sewing everything alone. That’s when her seed business began.

“I had just gone through my second ACL replacement on my knee, so all I could do was just sit there on the couch,” says Elizabeth.

Her father-in-law had a business selling a thousand varieties of seeds. He suggested that Elizabeth try selling them on Amazon.

“If it wasn’t for my father-in-law, we wouldn’t be here,” says Elizabeth. One day, while perusing a small supplier site, she saw an ad for air plants out of Florida. She ordered a pack of 50, and then 100. Those sold out. Then, she found a bigger supplier. After that, she found their supplier. Finally, she began ordering them directly from a Guatemalan farm.

Eventually, seeds were out, and air plants were in. Hinterland Trading was born.

Air plants, also known as Tillandsia, are unique plants that can live in the air without their roots (or soil). Because they pull nutrients from the environment through their leaves, these little guys can live in or on just about anything.

She employed her children, Bailey and Austin, to help her keep up. Then, she hired their teenage friends. Neighborhood students worked until 3:00 a.m. just to keep up with the stream of shipments.

“As a mom, when I worked a 9-5 job, I always felt like I was missing out,” says Elizabeth. “To have this chance to work side by side with my kids every day is amazing.”

A sense of family pride and independence is evident when you interact with the Ryan family. Kelle, Elizabeth’s husband, was able to leave his full-time job two years ago. Now, the four of them run Hinterland Trading together.

Elizabeth describes what it’s like to own and work a business together: “It’s moving our family as a unit in the same direction.”

After growing out of their successful Stafford, VA operation, the Ryans have relocated Hinterland Trading to Virginia Beach.

“We’re home, and there’s so much opportunity for us here,” says Elizabeth. “We ride our bikes to breakfast every morning. That’s pretty cool.”

Hinterland is a supplier to big names, like Urban Outfitters and Amazon, and will soon be on Walmart.com. Starting this summer, their larger Virginia Beach space will be featuring a myriad of terrarium classes.

Even before Elizabeth’s secret life in the intelligence community, she and Kelle had tried many businesses. Like true entrepreneurs, they built business out of ideas—things like shaving cream, woodworking, and pedicure parties.

Elizabeth blames her mom for inspiring a life of entrepreneurship. “You just don’t give up,” says Elizabeth. “Once you find what you want to do, just push harder and harder. Forging your life is much more satisfying than forging someone else’s.”

Part of Elizabeth’s success is also her self-proclaimed weakness: she’s over-prepared to a fault.“I’m always thinking 6 months ahead and three different ways to get there.”

Next time you’re in Virginia Beach, be sure to stop by the HT Studio. There,you’re sure to find local success story Elizabeth Ryan—working as hard as ever, and building a life to be proud of. 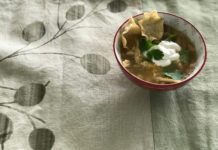 The Best Bone Broth Recipe (And Its A-Mazing Benefits) 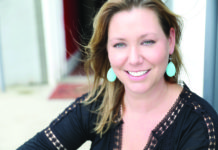 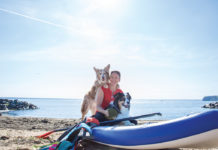 A Girl and Her Dog: How Maria Christina Schultz Taught Her Pup to Paddleboard